(Если бы я увидел подобную сцену в голливудском фильме, я бы решил, что смотрю очередную сказку, в жизни таких сцен не бывает.
Но это не страшная сказка, это такая страшная жизнь.)
Anzor Tsarnaev called on his son to surrender peacefully, but reportedly warned the United States that “all hell will break loose” if he’ll killed. He told ABC News that he spoke to his sons by phone earlier this week. He said his sons reassured him, saying, "Everything is good, Daddy. Everything is very good."
"Give up. Give up. You have a bright future ahead of you,” Anzor Tsarneav said, according to ABC News. “Come home to Russia.”
He continued: "If they killed him, then all hell would break loose." 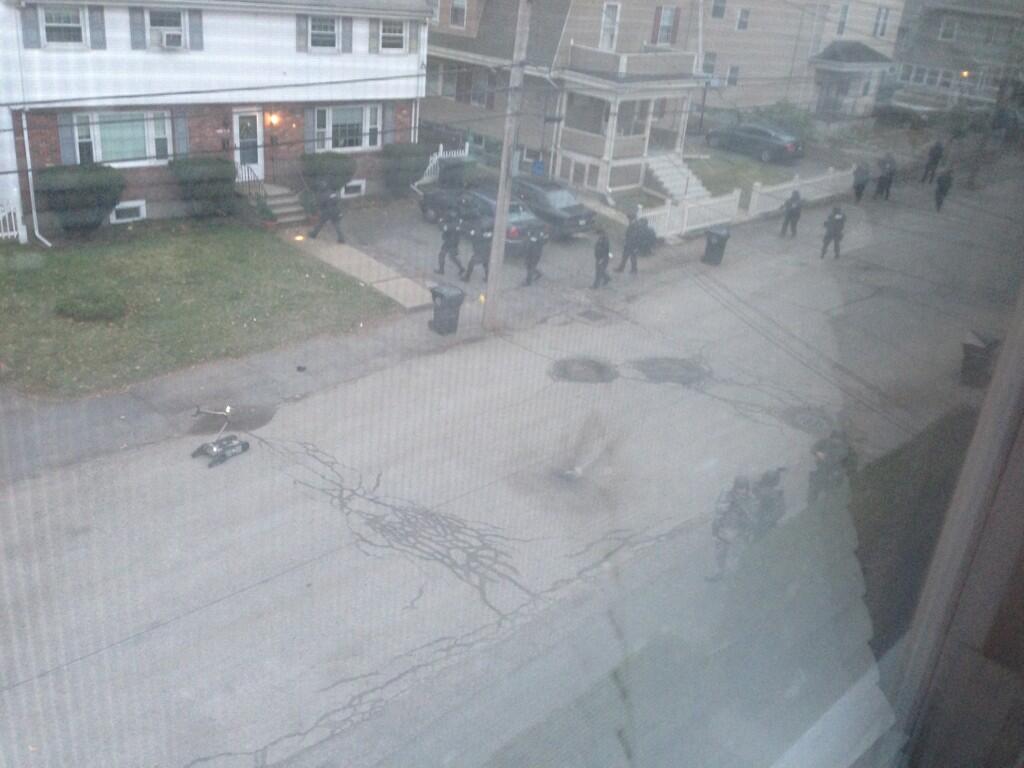 BREAKING: The second suspect in the Boston Marathon bombing is believed to be "down" after gunfire broke out in the Watertown section of Boston moments after state and local officials said their hunt had come up dry Friday.

Sources told Fox News a suspect was down. A neighbor described the sound of multiple shots as akin to "a roll of firecrackers shooting off," and blood was found on or near a boat at a home on Franklin Street.

Sources told Fox News the boat had been searched earlier, but a woman noticed a door to it had been opened, saw blood and called police. The gunfire broke out when police went to search it, but it was unclear if any police were injured.

Police were massing at the scene and an ambulance rushed to the area in a dramatic development came just after police said their hunt for Dzhokhar Tsarnaev had gone cold and urged people to "go about your business."

Early in the day, police told residents of several city neighborhoods, especially Watertown, to stay inside. School was canceled, bus and train service suspended and people were even told not to venture out for work. But those restrictions were lifted at the news briefing Friday night, even though the suspect remained on the loose.

For most of the morning and afternoon, the search was concentrated on the city's Watertown section, where Black Hawk helicopters patrolled the sky and police went door-to-door hunting for Tsarnaev. Police say he and his older brother, Tamerlan Tsarnaev placed the deadly bombs at the race. The sibling suspects are from Dagestan, a province in Russia

that borders Chechnya, but have been in the U.S. for as much as a decade..

On Thursday night, hours after the radicalized Muslims were fingered by the FBI and their images circulated around the world, they killed a Massachusetts Institute of Technology police officer and carjacked an SUV from a man who later escaped. The brothers led police on a chase through city streets that included a wild shootout and the suspects hurling explosives from the SUV. Bizarrely, police discounted earlier reports that the brothers had robbed a 7/11, saying although it had been robbed, and they had been caught on surveillance video, they were not the robbers.

The pursuit went into Watertown, where Tamerlan Tsarnaev, 26, was shot several times in the gunfight. But Dzhokhar Tsarnaev somehow slipped away, running over his already wounded brother as he fled by car, according to two law enforcement officials who spoke to The Associated Press on condition of anonymity. Tamerlan Tsarnaev was pronounced dead at a hospital Friday morning. But at some point following the shootout and car chase, the younger brother fled by foot, according to State Police, who said Friday night they don't believe he now has access to a car.

During the pursuit, a MBTA transit police officer was seriously injured and transported to the hospital, according to a news release. He was identified as Richard H. Donahue Jr., 33, and was at Mount. Auburn Hospital in critical but stable condition.

The suspects' bloody rampage claimed the life of MIT Police Officer Sean Collier, 26, who was found shot to death in his squad car at 10:20 p.m. Thursday. Moments after the shooting, the brothers carjacked the Mercedes SUV from Third Street in Cambridge and forced the driver to stop at several bank machines to withdraw money. The driver later told police that the brothers had bragged to him that they were the marathon bombers, law enforcement authorities said.

It was when police were working to activate the tracking device on the stolen SUV, that other patrol officers spotted it in nearby Watertown, touching off the dramatic chase.

Late Friday, Procopio said police found another pressure cooker bomb and several other explosives late Friday, but did not say if they were diffused or disposed of in a controlled explosions

8:54 PM ET: Citizens of Watertown, Mass. are cheering the departing parade of police and medical authorities as they lead away Dzhokhar Tsarnaev, who may be en route to a hospital, but his destination is unconfirmed.